Our Current Arrangements for Coronavirus (COVID-19) 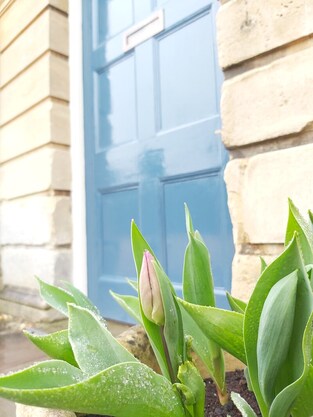 Following the latest guidance issued by the Government on Coronavirus (COVID-19), we have now closed our big, teal door for a while.

The health and well being of our team, our tutors and our students and anyone who visits Kingshill Arts, is truly important to us and it’s with a heavy heart that we’ve had to make this decision BUT we are determined to survive this and to come out the other side, healthy and quickly able to provide our local community with a place of positivity and light after what might be a dark time.

We are doing everything we can, to survive these unprecedented circumstances and we ask for your full support going forward. We will continue to monitor the situation closely, reschedule things where we can. We’ve put new systems in place to enable our dedicated little team, to continue beavering away, safely in the background. Our phones are still on, so keep in touch and  and please do continue to look at our programme of workshops with interest and plan for better times ahead.

Kingshill in the Press...

1. Apologies
2. Notice convening the meeting
3. Approval of the Minutes of the AGM held 26th November 2018
4. Approval of the Annual Accounts for year ended 31st March 2019
5. Election of Officers
6. Appointment of Examining Accountants
7. Chairman’s Report
8. Any Other Business
9. Date, time and place of next meeting

By order of the Board

Dennis Andrewartha
Chairman of Board of Trustees 13th November 2019

All Members of the Company are welcome to attend the meeting.

​If you are interested in becoming a member of Kingshill House Limited and being involved in the exciting future of this Grade II* listed Georgian Arts & Meeting Centre, a not for profit Registered Charity, please contact the main office on 01453 549133 or email admin@kingshillhouse.org.uk for more details.

Bird Lovers will be delighted at Latest Art Exhibition

A collection of spectacular Bird themed works of art by local artists are coming to Kingshill House, Dursley in an exhibition during September.

The exhibition will feature a collection of mixed media art including paintings, wire sculptures, textile art, glass, resin and enamel jewelry and forms part of an ongoing series of events in support of emerging artists in Gloucestershire. The exhibition will run from 14th to 28th September, commencing with a launch event on Saturday 14th September between 11am - 1pm, all welcome! Entry is free and members of the public are warmly invited to attend both the launch and the exhibition.

A collection of stunning portraits by local artists has opened in an exhibition in Dursley and which will run between July and September.
The exhibition at Kingshill Arts and Meeting Centre and is part of a program of events in support of emerging artists in Gloucestershire and will run from 15th July to 6th September 2019. Entry is free!
Last month, Kingshill Arts and Meeting Centre saw huge success with a ‘Countryside’ exhibition and hopes for similar success with this range of alluring art from local artists such as Paul Normansell, Kayleigh Almara, Andrew Kirk and Casey Rogers.
The collection features an assortment of amazing portraiture works of people, celebrities and animals, in a range of unique and thought-provoking styles and media. The artists all live and work nearby and includes high profile artist Paul Normansell, an artist who lives in Cam, and has had many high-profile fashion assignments including a range of portraits of supermodels Kate Moss and Agyness Deyn. In 2008, Paul was personally approached by Brandon Flowers of US rock band ‘The Killers’ and asked to create the cover artwork for their third album ‘Day & Age’ which went multi-platinum. Named ‘Best Album Cover of the Year.’ by Rolling Stone Magazine, Paul has also been ‘Man of the Month’ in April 2010's GQ Magazine and photographed by the legendary David Bailey himself.
Commenting on the exhibition, Natasha Senekal, Kingshill Arts and Meeting Centre said: “Exhibiting Paul Normansell’s work is a real coup for us. Paul’s art has received global acclaim from critics and collectors in the fashion and music industries, being hailed as some of the most style conscious imagery to define the shifting trends of popular culture.”
Arts Centre Host Event to Unite Clubs and People of Cam and Dursley
Local hobbyists, societies and clubs are gearing up for a day of connection at an event centred around the community in Dursley at the end of March.
Following on the from the success of last year’s event, the team at Kingshill Arts and Meeting Centre are once again holding their Societies, Groups and Clubs Fair on 23rd March.
With 30 different groups and clubs signed up to attend, the focus of the event is upon introducing people within the area to the names and faces behind the range of activities and interest groups which exist in Cam and Dursley and surrounding areas.
‘Last year the house felt alive with activity and the people who came along were given a real insight into the number of clubs which run in our area. There was a real mix of clubs, we had both well-known and undiscovered groups and we’re so pleased to provide this day to link everyone up. This event is great for anyone looking for a new hobby or interest!’ said Beth Pullin, General Manager.
The event runs from 11am to 3pm on 23rd March and entry is free. The house is currently being set up to run a series of exhibitions by local artists, so there will be also be a chance to feast your eyes upon some amazing artwork, as well as learn about activities which go on at the venue. All enquiries can be emailed to admin@kingshillhouse.org.uk or by telephoning 01453 549133.

First things first......
We would like to wish you a very happy and creative new year!!

Since 2015, informal discussions have taken place between the parties about the eventual transfer of the Freehold from SDC to Kingshill House Limited. At this point in time, no formal decisions have been made and consultations are still ongoing.  Stroud District Council provide a relatively modest capital grant each year to help with the operational costs, but the main income generated for the organisation is by way of providing creative workshops and classes and offering room hire to various users. Kingshill House as a Grade II* listed building is an expensive property to run and maintain and it is vital the organisation is financially sustainable if it is going to survive, be able to take the freehold of the building and assume responsibility for the maintenance of a building with such a magnificent heritage.

We are currently looking for new members to get involved and have a say in the future of Kingshill House, to offer ideas and generally act as an Ambassador, promoting the fantastic asset that Kingshill House Arts & Meeting Centre is to their family and friends. If you’d like more information, then you can ring the office on 01453 549133 or email us at admin@kingshillhouse.org.uk

​We hope that has made things a little clearer and we look forward to seeing or hearing from you in 2019.
Notice of Annual General Meeting of Kingshill House - 26 November 2018
NOTICE IS HEREBY GIVEN that the twenty second Annual General Meeting of Kingshill House Limited will be held at Kingshill House, Kingshill Lane, Dursley, Glos GL11 4BZ on Monday 26th November 2018 at 7 p.m. Business to include:
1. Apologies
2. Notice convening the meeting
3. Approval of the Minutes of the AGM held 28th September 2017
4. Approval of the Annual Accounts for year ended 31st March 2018
5. Election of Officers
6. Appointment of Examining Accountants
7. Chairman’s Report
8. Any Other Business
9. Date, time and place of next meeting

By order of the Board
Andrew Telford
Company Secretary
26 October 2018
All Members of the Company are welcome to attend the meeting.
If you are interested in becoming a member of Kingshill House Limited and being involved in the exciting future of this Grade II* listed Georgian Arts & Meeting Centre, a not for profit Registered Charity, please contact the main office on 01453 549133 or download a membership form and return to admin@kingshillhouse.org.uk.
Summer School Success for Friendly Art Venue 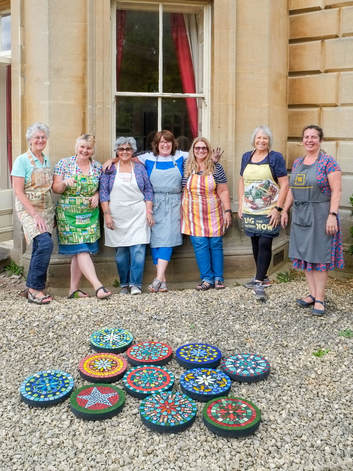 Students and their mosaic stepping stones outside of Kingshill House
​Dursley’s Kingshill House Art Centre is celebrating following the success of their first ever ‘Summer School’ which ran from 16-20 July.
Kingshill House, an impressive and historic setting, teamed up with Stroud and Gloucestershire based art tutors and welcomed more than 60 students through its doors whilst providing around 50 hours of artistic tuition during a week of adult learning in Dursley.
Students, who came from all over the county, enjoyed a friendly and inspiring atmosphere during this series of one or two day workshops covering creative subjects such as ceramics, watercolours, print making, glass fusing, Pyrography, botanic wall plaque creation and garden mosaics. Participants were made to feel at home while they learned new skills receiving homemade biscuits, cake and delicious two course lunches during their visits.
‘We couldn’t have wished for a friendlier bunch of people to come along. I’m overwhelmed by the success of the event, specifically with the vibe and enormous feeling of goodwill in the building and it has, quite simply, been amazing!  Beth Pullin, Manager, Kingshill House.
Building upon the success of this recent event, plans are already underway for a Christmas themed art week nearer to the festive season. Anyone interested should visit www.kingshillhouse.org.uk for more details.