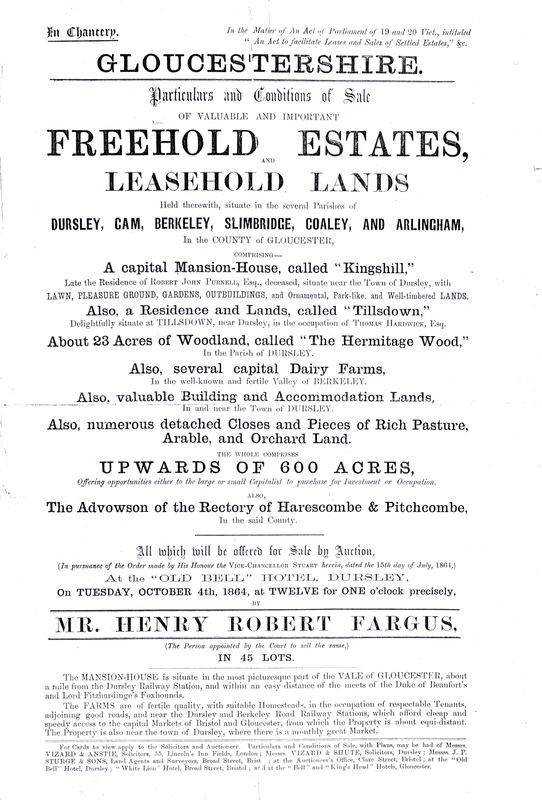 Robert Purnell (nee Hooper) had inherited or bought a sizeable amount of land. Apart from the Kingshill estate, he owned Tilsdown House and lands in Cam; Heritage Woods above Dursley Workhouse (at the top of Union Street) and fields adjacent to the workshop; four farms near Berkeley and the advowson (the right to appoint the incumbent) of the rectory of Haresfield and Pitcombe.

Robert John Purnell died in 1861. After his death his will was contested, which led to the involvement of the Court of Chancery, which decided that the estates should be auctioned. 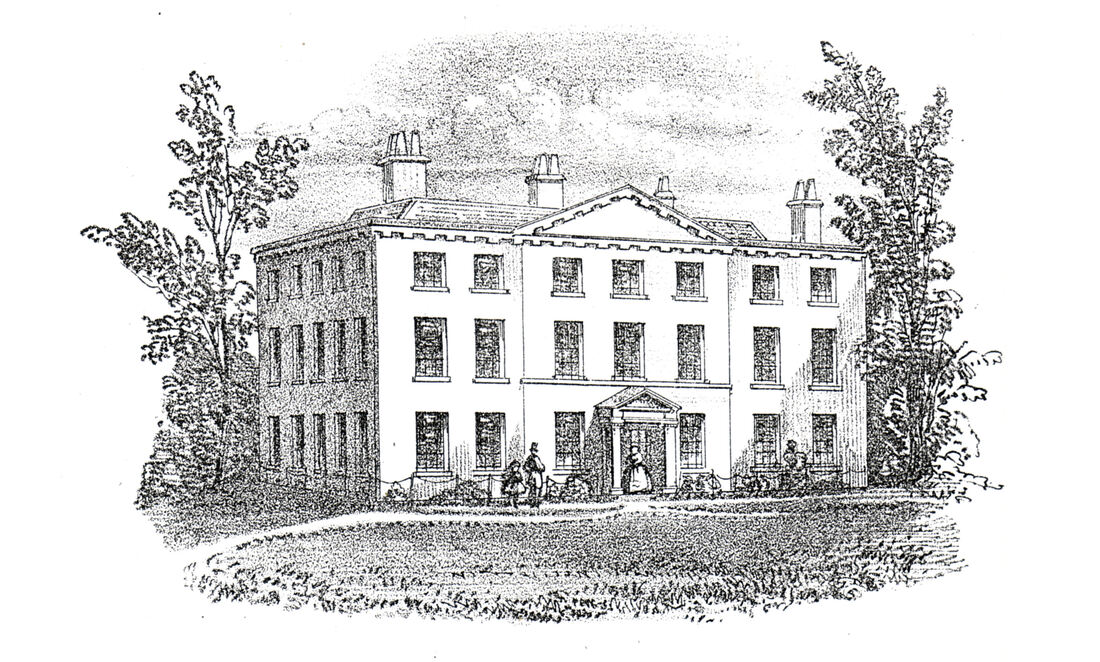 This illustration perfectly shows what the house would have looked like before the major renovations undertaken in the 1870s. Specifically it reveals the original symmetry of the façade, destroyed by the erection of a two-storey wing to the north of the house and the extensive alterations made to the entrance porch.

The simple yet elegant Regency proportions of the house are best seen when approaching the house from this angle, which is where the driveway once lay. 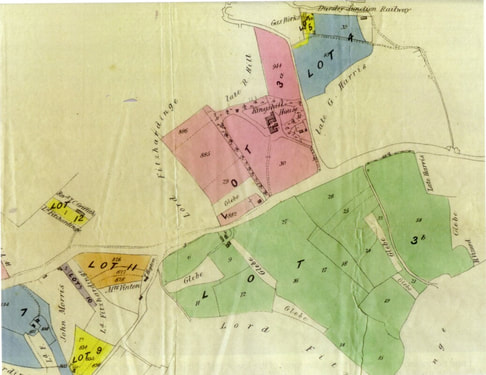 The estate, as it appeared for sale in October 1864, compromised in total of 79 acres of which the house and immediate grounds represented over 5 acres. Lots 3a and 3b (pink and green on the map) were bought by Thomas W Richards. Lot 4 (blue on map) was bought by William Champion of Long St Ropeworks.


​
The house was marked as Lot 3 in the catalogue and there was a provision that if it did not sell then it would be re-offered in two separate lots - dividing the house and grounds from the lands held on the other side of the road. There was no need for this provision however as the whole lot was purchased by local Maltster, Thomas Williams Richards for the sum of £6095 (approx. £791,939 in today's values).

The sale documents describe the house:
There was a good supply of hard water which would have come from the wells and soft water which would have been rain water collected from the roof and stored in a large tank halfway up the stairs. Stabling for six horses, coach house and harness room were also mentioned.
The New Owner
Thomas William Richards, born in Dursley around 1803, purchased Kingshill House and estate at the auction in 1864 but he never actually lived there.

Mr Richards was a Corn Merchant and Malster who lived at 'The Hollies' (built 1733) in Parsonage Street, Dursley. HIs sister Louisa married George Lister (the father of Robert Ashton Lister). Louisa had eight children and died in 1849 at the age of 35.

Captain of Militia, Thomas Morse J.P. rented Kingshill during the period of the Richards ownership. Mr Morse was a local man, born in Cam around 1833.

Rent for the house and estate was around £124 a year (around £16,111 in todays values). At the time of the 1871 census Kingshill was occupied by Morse and his six daughters. Mr Morse then moved with his family to Ashmead House in 1876.

​The agreement for sale and purchase of Kingshill to Frederick Edwin Eyre (of Preston Hall, Uppingham, Rutland) was dated 6th June 1876.