The 1841 census provides a snapshot of the family residing in the house at this time.

The head of the family was Robert John Purnell (originally Hooper, born 1789, died 1861) who was married to Mary Anne Hughes (b. 1786, d. 1842). Robert was the son of Robert Hooper of Bradford, Wiltshire and Mary was the only child of the Rev. Lewis Hughes, Vicar of Llanrhyddlad in Anglesey.

Mary was the link to Kingshill - the niece and heiress of Lt. Col. Purnell. She adopted the arms of Purnell upon her inheritance of the estate and at the same time (according to certain authorities in pursuance of Col. Purnell's will), Robert assumed the surname and arms of Purnell in 1826, and is recorded at The College of Arms, London.

Robert and Mary's only son was the Rev. Thomas Purnell of Boddington, Glos. He was the Vicar of Staverton-cum-Bodlington.

R.J. Purnell was listed in Pigot's Directory of 1830 at Kingshill and in 1831 as having the right to 3 pews in the local church due to his ownership of the house and other properties.

Dursley Gas Works, opened in 1836, was built on the site of an old orchard leased from Mr Purnell in an area known as Trolley Moors (now known as Kingshill Lane or 'Gas Works pitch'). 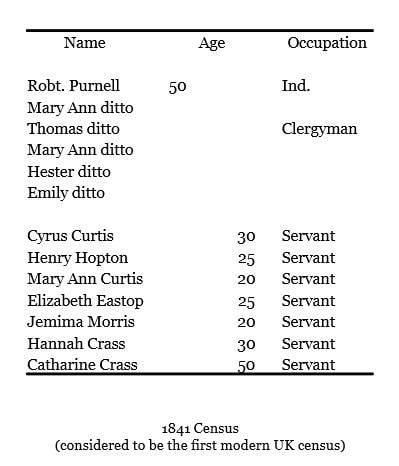 1861
The 1861 census tells us a different story to that of 1841. Sadly, Mary Ann has died, leaving Robert a widower. He is living at the house with Mary, his daughter, Henry, his son-in-law and his grandchildren - Emily, William and Robert.

Robert Purnell Sr. served as the Deputy Lieutenant and Justice of the Peace for the County of Gloucestershire.
Henry Hopton is still working for the family, during this time he is listed as a Coachman. 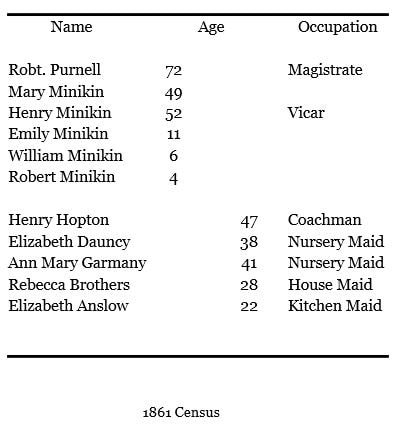