Many members of Thomas' family held the title of 'Bailiff of Dursley'. The election of the Bailiff was held annually at the sitting of the Court Leet in October and the elected member started his duties on the 1st January the following year. On that day, he, with the Corporation, attended Divine Service during the morning at the Parish Church. The Bailiff was clad in an official robe of scarlet bound with fur and the Aldermen wore gowns of tawny colour.

In the evening a banquet for the Corporation was provided at the expense of the new Bailiff and for many years this event took place at the Old Bell Hotel. At the end of the 18th century the Bailiff had little authority to do much more than examine the weights and measures.

There are three memorials to the Purnell family in the local church, it is a very useful source to ascertain their characters and what the town thought of them.

Here is buried Thomas Purnell of Kingshill, Esquire
A very talented cultured man of upright and serious character,
who, while he was serving his country for a long time, cared equally for his friends and family.
Finally from old age and with great honour he died on October 29th AD 1729, aged 77 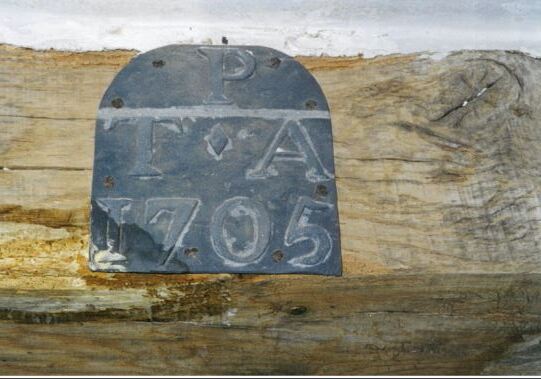 It is a testament to the original workmanship that much of the timber has survived in the attic and roof area. The servants quarters were located here and underneath the rendering there is a quantity of original wattle and lathe plastering, often complete with horse hair.

The renovations undertaken by the Purnell family at the end of the 18th century erased this part of the house, however hidden underneath the rendering there is a treasure trove containing original features. This is where the date plaque (above) was found, reading 'TPA 1705' recording the year that Thomas Purnell purchased the house and established it as a late eighteenth century gabled mansion.

Purnell demolished the west side of the existing house and built his house adjoining the remainder.